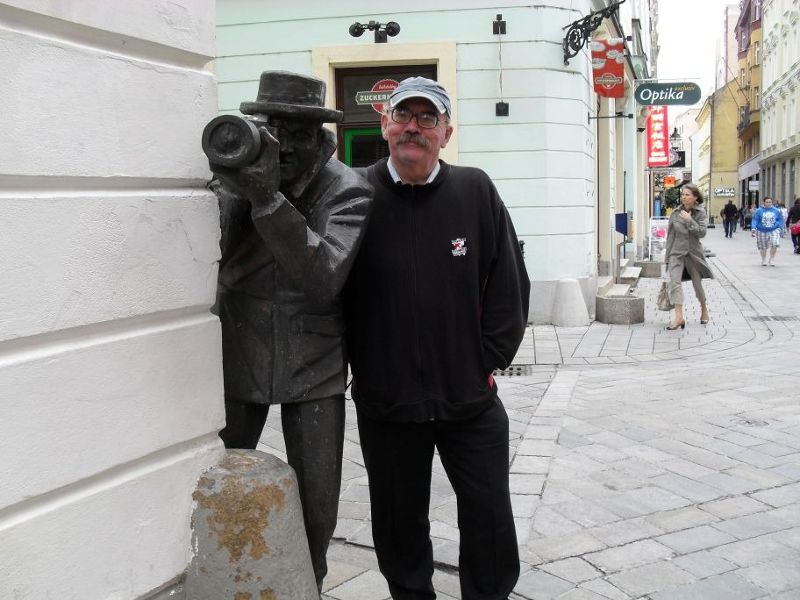 My husband with the papparazi statue - Bratislava

Bratislava is the capital of Slovakia. It has a population of about 430,000 and is situated on the Danube River. It has quite a pretty old town with a castle, churches and squares.

Despite being July, the weather was freezing when we visited,15 degrees, windy and raining. However, we did not let that spoil the day. We took tram 13 from the train station to the old town. The ticket from Vienna includes transport in Bratislava for the day. Make sure you do have a valid ticket as there are many ticket inspectors around. With limited time we concentrated on the beautiful old town and the castle. There was a lovely feel to Bratislava despite the temperature. One of the things tourists like doing in the old town is posing with the quirky bronze statues which are dotted around the place. 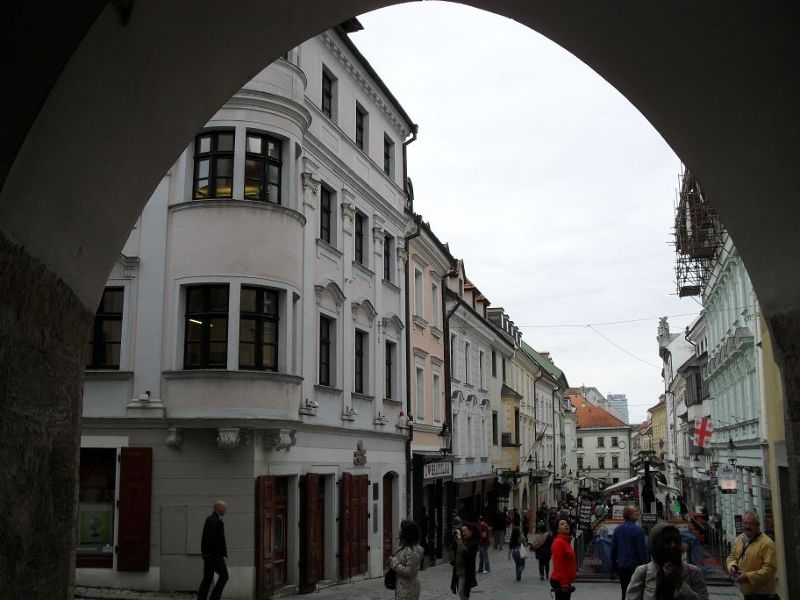 The main square of the old town is scenic. Here there are some lovely old buildings including the old town hall. There is also a pretty fountain and two of the quirky bronze statues a Napoleonic soldier and a sentry. 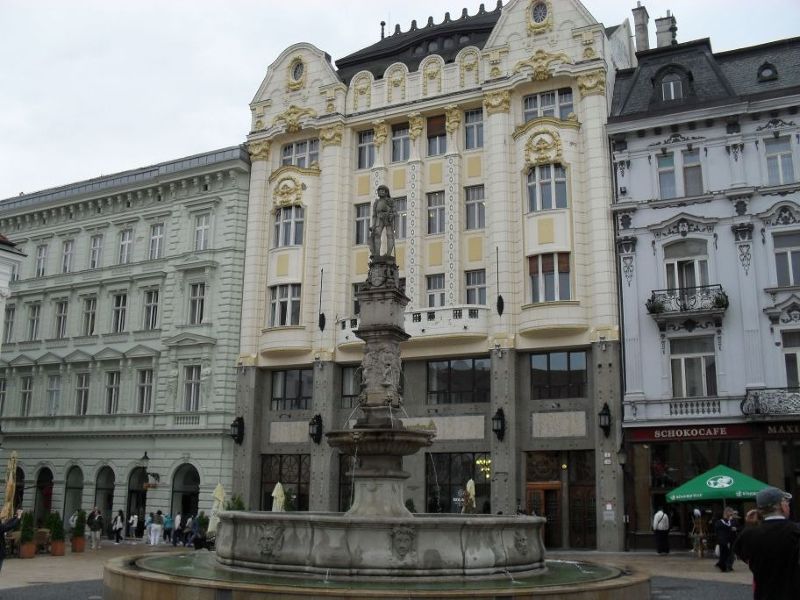 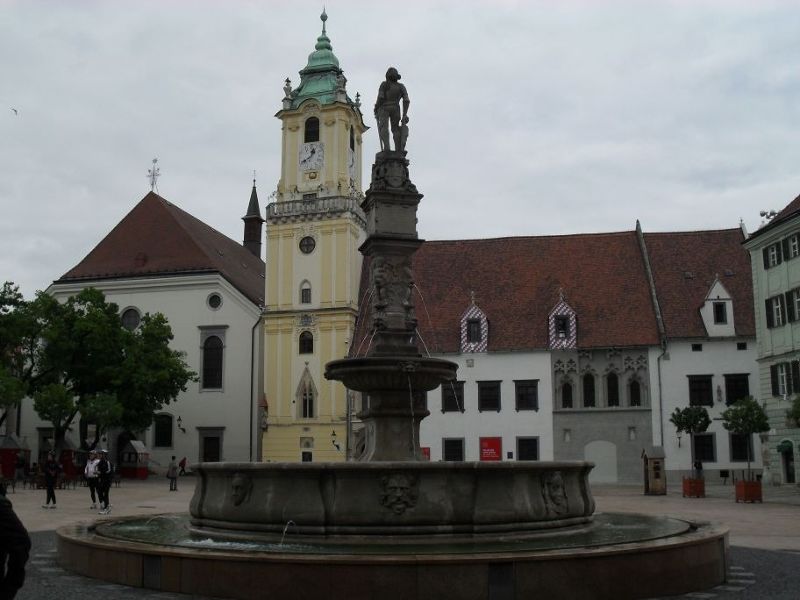 Bratislava Castle is perched on a hill just outside the old town. It is a pretty white building with a museum inside. We did not visit the museum. I think it was closed when we visited. The castle has quite nice gardens but the main reason to visit is for the lovely views over the Danube and the old town. 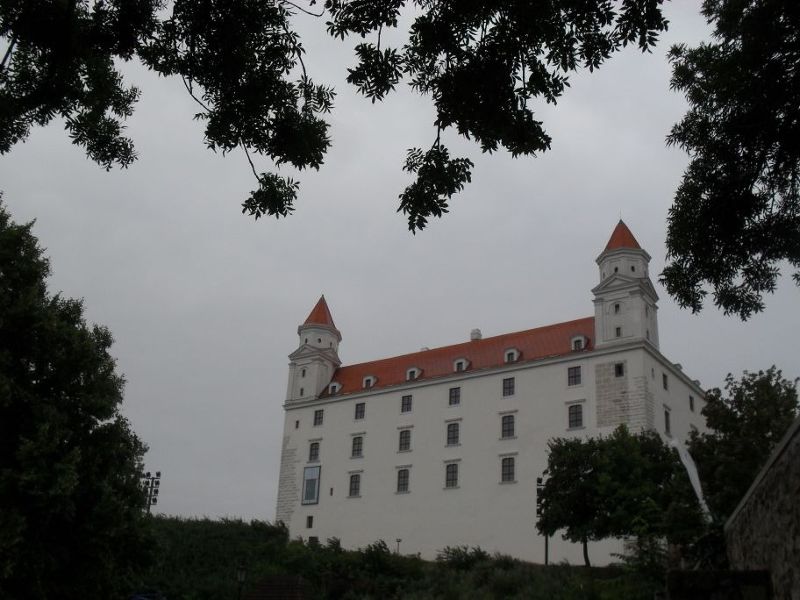 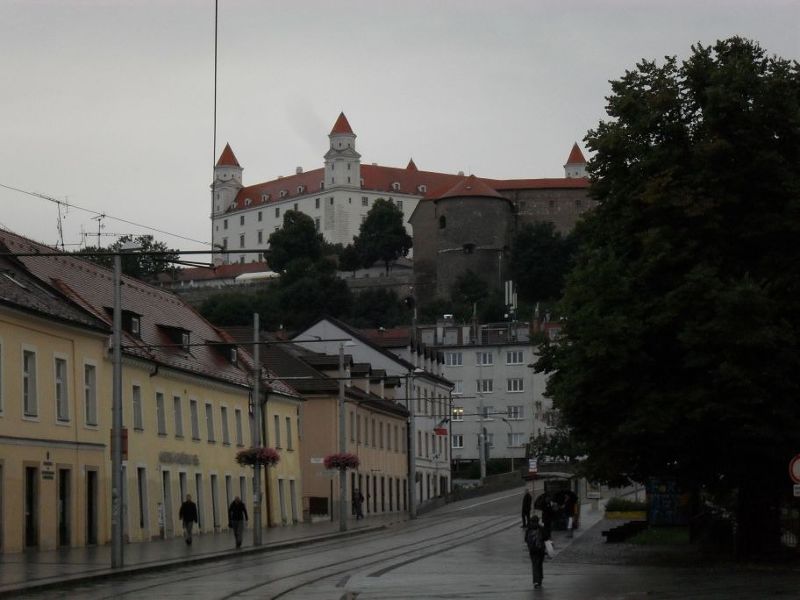 View of the castle from the old town - Bratislava 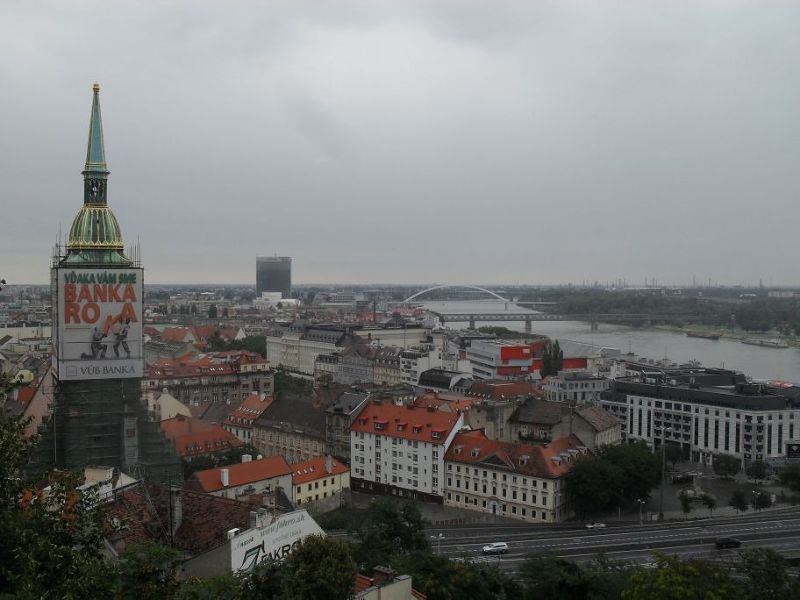 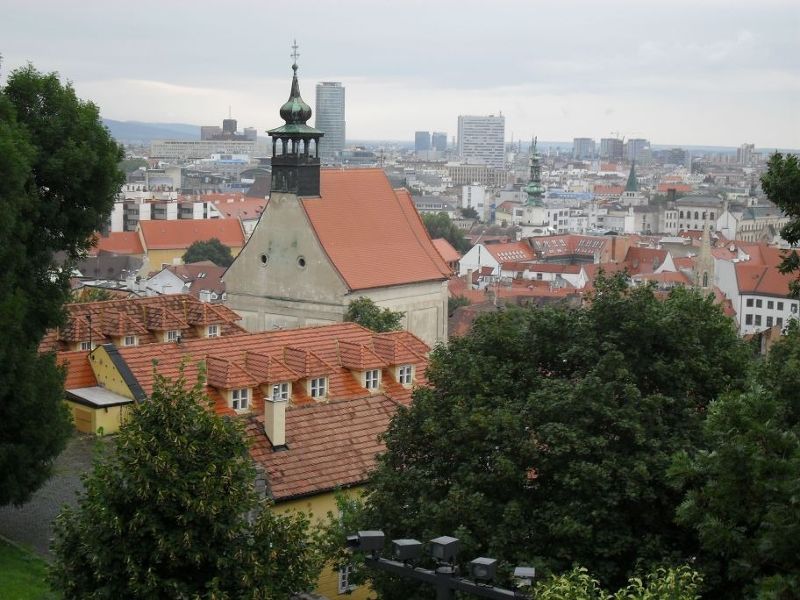 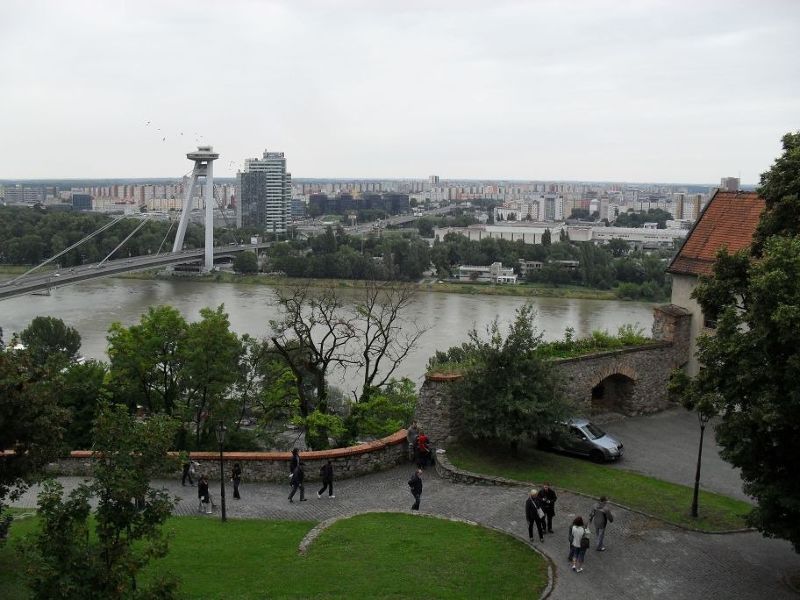 View towards Novy Most Bridge over the Danube - Bratislava

A fun thing to do in Bratislava is to go and look for all of the quirky bronze statues dotted around the town. We found the ones listed below.

The quirky sentry statue is on the main square near the old town hall. He is one of Bratislava's many very photogenic statues. We made it our business to find as many of these as we possibly could. I think they are quite a fun idea and well worth a look. 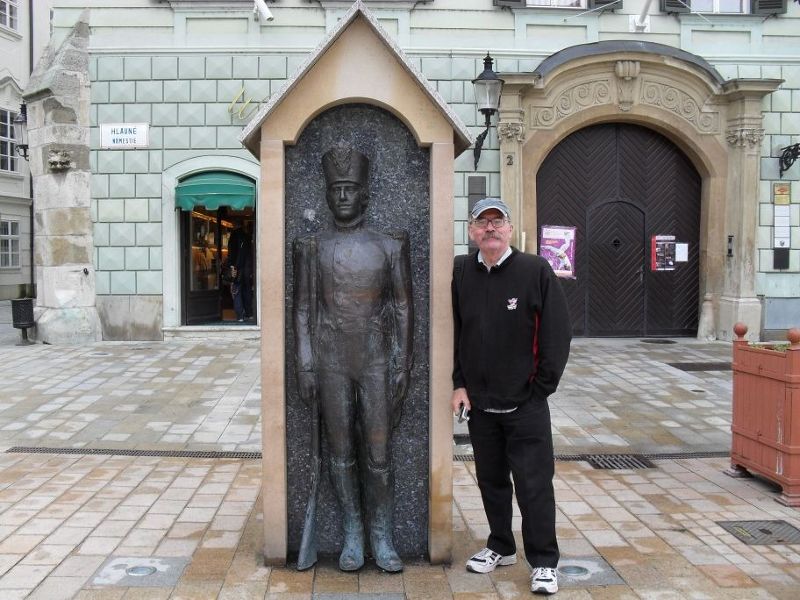 The Napoleonic soldier statue is also on the main square generally surrounded by tourists. I do not entirely know his significance to Bratislava but he takes a good photograph and is quite good fun to pose next to. 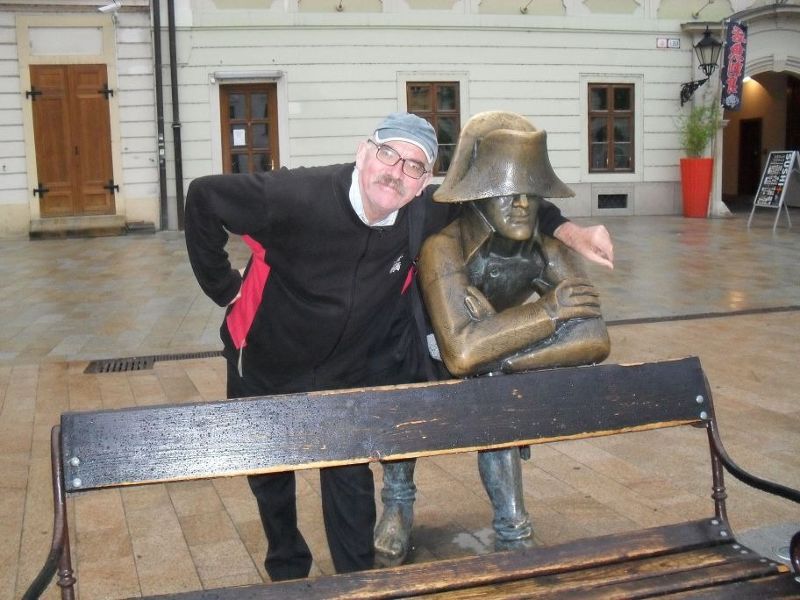 The Schoner Naci statue is on a lane just off the main square. It is quite a nice statue to photograph or pose next to. I would never do so if Bratislava were more touristy and you had to queue up for such a thing, but at least when we visited it was not. 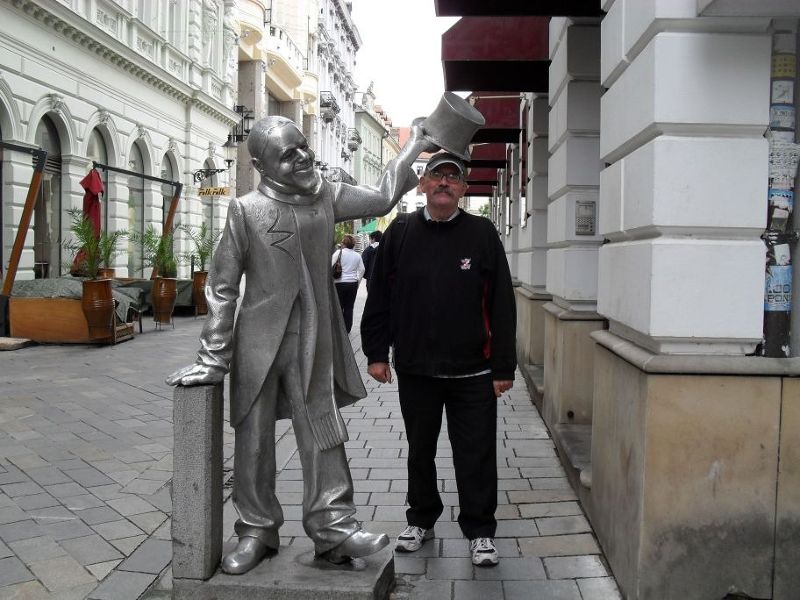 Just along the road from Schoner Naci is Cumil or Rubberneck peering out of the ground from a manhole. There is a warning sign near him to stop cars running over him. It is quite a unique idea. I have never seen a statue like this before. He is located at the junction of Laurinská and Panská streets. 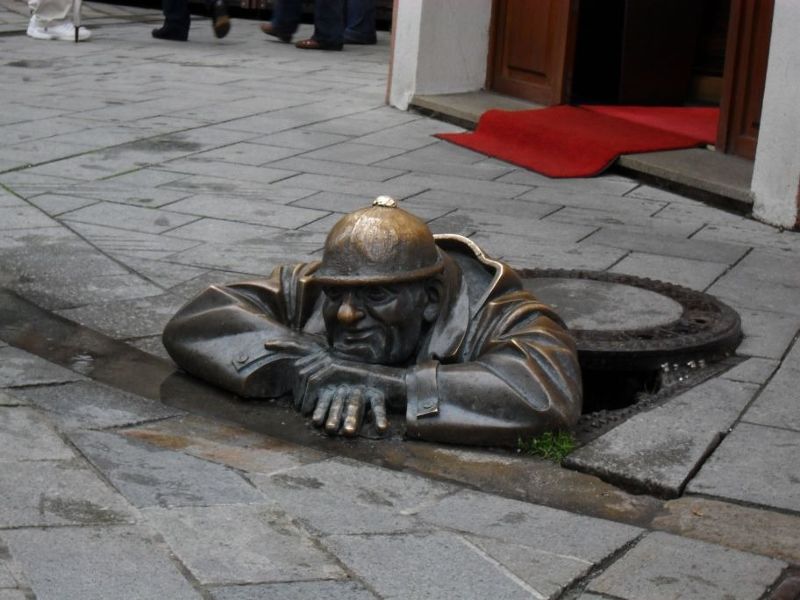 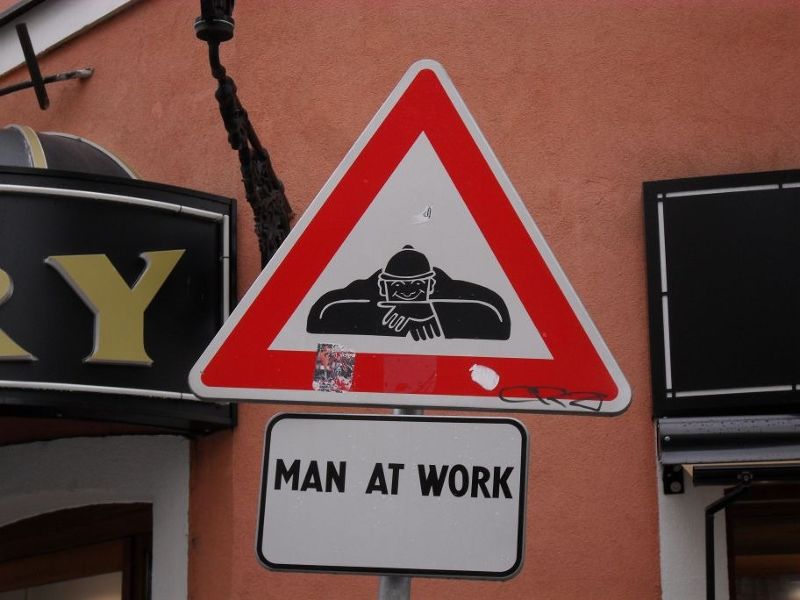 If you are standing facing Cumil go left and walk along the street until you find the papparazi statue. He peers at you down the lens of his huge camera, so make sure you are up to no good when you walk in front of him. 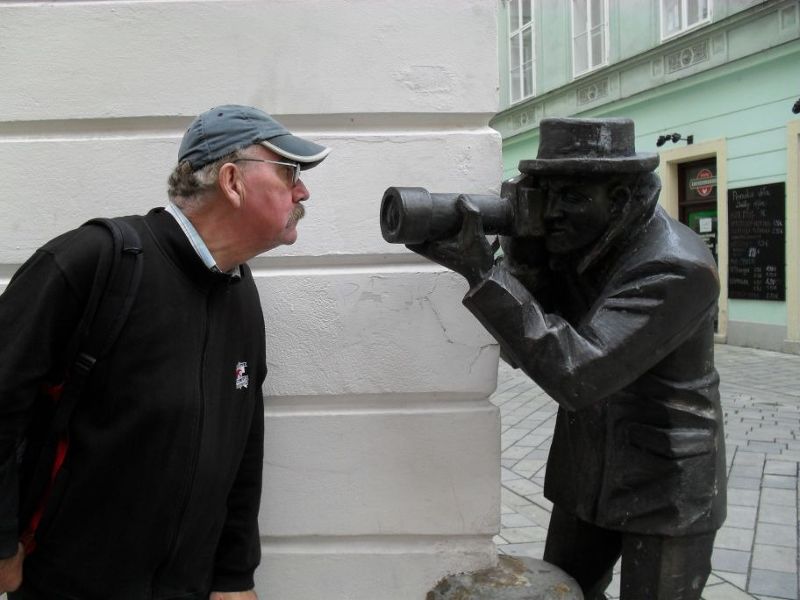 This skateboarding girls post box is on the shopping street outside the Crown Plaza Hotel. 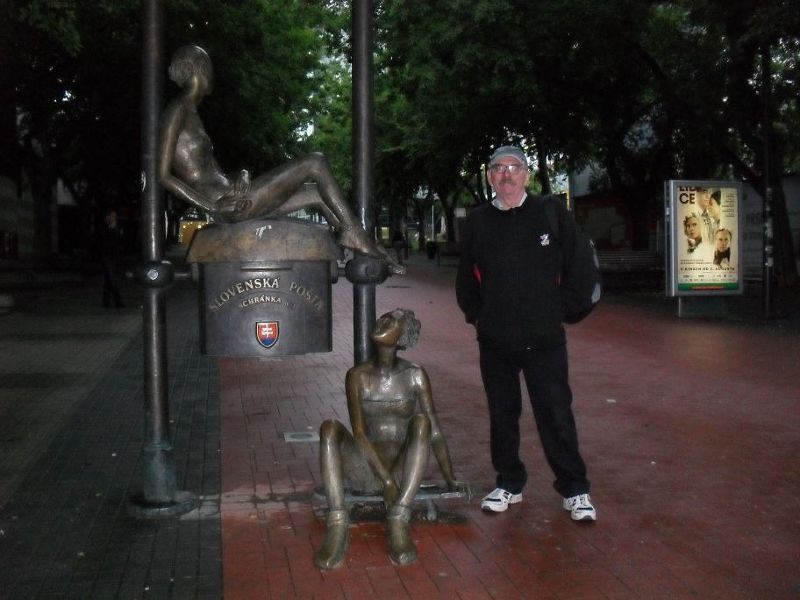 Train To Bratislava From Vienna.

We visited Bratislava on a day trip from Vienna. To get there we travelled on the U bahn to Praterstern then changed to the S-bahn to the Sudbahnhof. We exited the station, went left, crossed the road and entered the Sudbahnhof We bought tickets from the red ticket machines for 14 Euros return. Trains left at 20 past the hour and took 1 hour 10 minutes to Bratislava making it an easy day trip

Posted by irenevt 18:57 Archived in Slovakia

Previous Next Table of contents

This blog requires you to be a logged in member of Travellerspoint to place comments.

If you aren't a member of Travellerspoint yet, you can join for free.